Microgaming is undeniably the biggest name in slot development; this comes as no surprise considering the firm is the father of online gambling and has continuously introduced innovations to make it a trendsetter in the business. Microgaming has a portfolio of more than eight hundred and fifty real money games, and one of the titles that boast an impressive following is the Exotic Cats slot. In Exotic Cats, Microgaming explores the jungle theme which is one of the highest demanded online. However, instead of a general approach, the software company focuses on the big felines of the animal kingdom which are the lion, tiger, panther, leopard, and cougar.

The Exotic Cats game carries five reels and three rows that appear to be carved onto a wooden frame. The graphics and animations of the set are not the best by Microgaming standards, but they are good enough to make the game worth a try. The playing grid is made entirely black, and the only colour on them is from the icons they hold. The backdrop is made into a forest thicket with different greenery, and the images are developed using cartoon graphics. The title of the game sits on top of the reels in beautiful brown fonts that complement the reels beneath it.

When playing, punters will notice that every reel is labelled with one of the big cats the theme revolves around. The first reel is given to the lion, the second to the tiger, the third – panther, the fourth – leopard, and the fifth – cougar. From time to time, the corresponding cat will peak on top of the reel and disappear after turns the reel into expanding wild. During the free spins round, all the felines sit on full display on top of the playing grid perched on all fours as if ready to prance on a hunt.

Microgaming is among the many online gaming software firms that have maintained the original gameplay procedure of casino slots in their sets, which has retained its popularity. Exotic Cats carries a simple procedure of play that is easy to grasp by gamers of diverse set skills. All the punter has to do is:

Since Exotic Cats pokies machine uses 243 ways to win to determine the combinations that are worthy of payouts, players are not granted the option to choose the number of lines to activate. The winnings collected after each round is displayed at the centre of the control panel after which it is added to the credits balance placed to the left end of the same bar.

The characters placed on the reels of Exotic Cats slot are mostly in line with the theme of the game aside from a few which are generic in the pokies field. These symbols include:

Each of the cats featured in the game is wild and can complete the combos of other characters. However, these icons only carry wild features when appearing on the reel labelled after them. The slot logo also plays the role of the wild, but it holds its power despite the reel it lands on. All characters can be replaced with the exception of the gold coin, which is the scatter and bonus spins trigger.

Microgaming mostly pays in the form of credits, and the same case applies in Exotic Cats online slot for combos of two to five similar characters. Below is a perusal of what each symbol pays:

The game has a return to player of 96.3% and medium variance, so you have big chances to get jackpot prizes.

Exotic Cats can be launched on smartphones and tablets in download and no download modes in numerous NZ casinos that support Microgaming software. 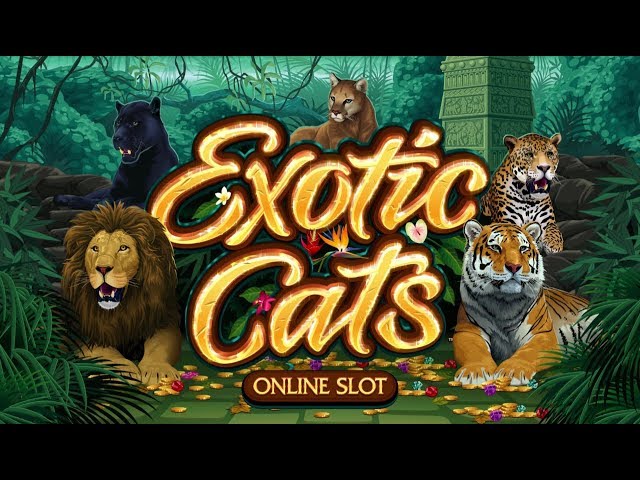